I initially was not going to make a post about Christmas and atheism, until I saw this article about Atheist celebrating Christmas on the Finding Truth Blog and that for an atheist to celebrate Christmas is not just ‘merely insane, but shows weak conviction.‘

Considering that this is my first atheist Christmas I am actually really excited about Christmas, because in years past as a Christian I always viewed Christmas as a pagan holiday that took away from the glory of God and Jesus.  (And for those who are thinking was I one of those radical Christians, who did not celebrate Christmas the answer is NO; however I was against the general tradition, commercialism, and paganism of Christmas.)

In retrospect my distaste for Christmas actually started with the Bible:

“Do not learn the ways of the nations or be terrified by signs in the heavens, though the nations are terrified by them.  For the practices of the people’s are worthless; they cut a tree out of the forest, and a craftsman shapes it with his chisel.  They adorn it with silver and gold; they fasten it with hammer and nails so it will not totter.  Like a scarecrow in a cucumber field, their idols cannot speak; they must be carried because they cannot walk.”

For me belief in God, was not just about belief, it was also about devotion and servant hood. Because I owed everything to this God, the last thing on this green earth I wanted to do was offended him, and this scripture was pretty clear in context that there was certain aspects of Christmas that needed to go.  So for the first five years of my marriage, we did not have a Christmas tree in our house.  Now in addition to that I had two of my other Christian friends lecture me about celebrating Christmas, cause they knew it was a pagan holiday. Because they felt like I was not going far enough in not celebrating it at all. In the sense that its root and origins having nothing to do with the birth of Christ or even Christianity.  And I knew it was pagan holiday and that Christmas was not in the bible, so there question to me was Why do I celebrate it?  And the only answer I could give was….tradition.

So important did this conversation become, that my wife emailed the pastor of the church, because she was getting tired of not celebrating Christmas properly, and I was not giving in.  In his email he encouraged us to research the topic as a family and come to an agreement as a family.  So that is what we strived to do,  so we spent a lot of time researching not just the context of Christmas Trees, but the History and Origin of Christmas.  And come to find out, that early in American history Christmas was actually outlawed, because of its paganism.  But that Christmas is more grounded in secularism and paganism than Christianity.

However in learning all that, we learned that Christmas brings people together.  There are stories of in World War II, where the soldiers stopped fighting for a day and implemented an unofficial cease-fire because it was Christmas.  In fact there is a story of a very extravagant Muslim hotel, with a $11 million dollar christmas tree.

So as an atheist I feel free to truly bask in the tradition and legacy of Christmas without the fear of offending my God with this pagan and secular religion.

And yes now, I have a Christmas Tree…Here is a Picture of it. 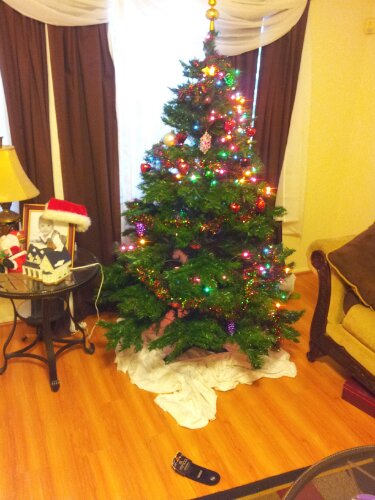 When I first received Christ salvation, I made it a priority to read the whole bible and I did. But it was the Bible that made me question my faith. For I found it flawed and lacking. Due to this I launched a personal inquiry/investigation into my faith, and ultimately realized that the Christian God of the Bible was indeed man-made. Now I Blog about those findings and life after Christ.
View all posts by M. Rodriguez →
This entry was posted in atheist, atheist vs christian, bible, biblical difficulties, christ, church, confusion, debate, deceived, early christian history, god, jesus, jesus the christ, jesus the messiah, life, message, quote, Response, scriptural difficulties, word of god and tagged Atheist, bible, BitterSweet, christian, christian history, Christianity, Christmas, church history, community, early church history, God, Holiday, Judeo-Christian, Paganism, unbelief. Bookmark the permalink.
%d bloggers like this: