Religion vs. Science: How and Where they Contradict?

In my previous post I talked about how among the opinion of the general populace that even though many say that there is no contradiction among religion and science.  The christian community is struggling in this area because nearly a full third recognize that church, science, religion and biblical Christianity are irreconcilable.  Even televangelist Pat Robertson recognizes the controversy.

Now for most who believe that the irreconcilable differences between religion and science are limited to just the controversy of evolution.  I beg to differ, I would say it goes much farther and deeper than that.  When I was doing some reading and studying to prepare this post, I was reading one christian article that took the stance that science and faith ‘never‘ contradict, but then when on to say “that there is nothing unbiblical about the scientific method as such. God made light, matter, water, plants, animals, and humans.”  Which I found a very obtuse statement, because science never affirms this statement.  In fact, when a scientist goes into the lab to do his or her experiments, he assumes no god.  Because that is the way science works.  Now I am not saying that a scientist can’t believe in God, what I mean is that for the scientist to do his job effectively he can’t take God into the lab.  He can’t presuppose god in his or her experiments.—-He Assumes NO God!!!

“My practice as a scientist is atheistic. That is to say, when I set up an experiment I assume that no god, angel or devil is going to interfere with its course; and this assumption has been justified by such success as I have achieved in my professional career. I should therefore be intellectually dishonest if I were not also atheistic in the affairs of the world.”  — J.B.S. Haldane  In Fact and Faith (1934), vi

The Contradiction between religion and science lies more in the minds and hearts of people in that most people keep the two separate, and never bring them under the same roof of thought.  For the most part they don’t overlap; however their are areas in our lives and history where the two go to battle.  As Albert Einsteen said the… “content of the religious traditions which is likely to come into conflict with science. This occurs whenever this religious stock of ideas contains dogmatically fixed statements on subjects which belong in the domain of science.”  Meaning that the issue is not do religion and science holistically conflict, but in what areas do they conflict? 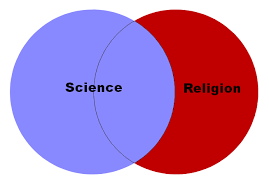 In early history, the first major quarrel was the Trial of Galileo.  Now in our modern history the biggest conflict has been the creationism-evolution controversy.  There are other areas where religion and science have contradicted, however now I would say it has expanded to include other things such as:

Abortion–  For most this is an issue of morality, but as well an issue of science.  For scientist, say that age of life and viability is when the unborn child can survive outside the womb.  Where Christians say life begins at conception, because that is when the fetus first has their soul.

Biblical Miracles– Miracles in the bible for if they were true, they would be contradictions of natural science: 6 Day Creation in Genesis, Talking snake, WorldWide Flood, Sun Stays Still for a Day, Bats are a type of Bird, and Living in the Belly of a Whale for 3 Days

Modern Medicine vs. Faith Healing– There are some major religious organizations that prohibit their parishioners from getting medically needed services like surgery and blood transfusion.  Those religious institutions believe that with enough prayer God will you, and that you don’t need science or medicine to overcome bodily sickness, just faith.  Even though there are countless reports of children dying of preventable conditions, all because parents refused to take their to a doctor.

Global Warming– For many right wing conservatives do not believe this is real, in spite of what the wide majority of scientist say.

Intelligent Design– That life on earth shows signs and evidence for an intelligent designer.  This is the complete opposite of evolutionary biology and the majority of the scientific community.  Astrophysics Neil deGrasse Tyson described it more as a product of a ‘bad design.‘

The Resurrection of Jesus–  For if this was true, it would be by definition a miracle and a suspension of the laws of natural science.  And for secular historians and scientist, there is no relevant nor sufficient evidence in the minds of most of them to support this claim.

Condoms and Contraception- The use of condoms and contraceptives is combated not just by the catholic church but many other religious denominations. (Mormons, LDS, Laestadianism, Muslim and Christian fundamentalist).  This is more a medical issue because for some religious families they will continue not to use contraceptives even when the mother’s life is in danger against the Doctor’s orders.

Sex Education– Many (not all)of the Religious church going types believe that the only sex education course that should be taught in school is Abstinence-only, but studies have shown that abstinence only education is ineffective.  And in fact may lead to higher teen pregnancies as is evident in the religious bible belt of america.  And is still being pushed in many schools in spite of this research.

When I first received Christ salvation, I made it a priority to read the whole bible and I did. But it was the Bible that made me question my faith. For I found it flawed and lacking. Due to this I launched a personal inquiry/investigation into my faith, and ultimately realized that the Christian God of the Bible was indeed man-made. Now I Blog about those findings and life after Christ.
View all posts by M. Rodriguez →
This entry was posted in atheism, atheist, atheist vs christian, bible, christ, confusion, contradiction, creation, creationism, evolution, evolution vs. creation, god, Intelligent Design, jesus, jesus the christ, jesus the messiah, laws of logic, messiah, miracle, quote, reasonable evidence, reasoning, religion, religion vs. science, Response, scientist, youtube and tagged Albert Einstein, Atheist, bible, biblical Christianity, biblical intelligibility, christian, Christianity, community, Contradiction, creation, Creationism, Evangelism, evolution, faith, God, Intelligent Design, islam, Miracle, miracles, muslim, Neil deGrasse Tyson, quote, quotes, reasonable faith, religion, robert Ingersoll, science, Science and Religion, Unfaith. Bookmark the permalink.

1 Response to Religion vs. Science: How and Where they Contradict?